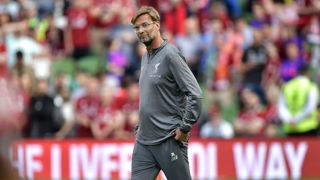 Jurgen Klopp is open to taking charge of Germany's national team in the future, though he is in no rush to leave his post at Liverpool.

Germany suffered World Cup embarrassment in Russia this year, getting dumped out of the group stage as champions.

It was the first time since 1938 that Germany had been eliminated in the first round of the World Cup, with some calling for a shake-up in the German Football Federation (DFB) as a result.

Joachim Low looks set to remain as coach, though the failure has raised some doubts about his selection choices and a perceived unwillingness to look to the next generation.

Klopp had understandably been tentatively linked as a potential replacement and, although he is open to the possibility of becoming Germany coach one day, he does not expect that to be anytime soon.

"Should I be asked at some point and I'm available, then I would think about it," Klopp told Welt am Sonntag.

"But am I thinking about it right now, in my current situation being tied to Liverpool for the next four years and only because Germany have just played a bad World Cup? No. I'm not available."