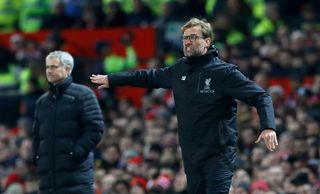 Liverpool manager Jurgen Klopp is planning something unpredictable to combat what he believes will be a defensive Tottenham team put out by Jose Mourinho on Saturday.

The Portuguese has thrown a spanner in the works for Liverpool plenty of times over the last decade, most famously when he torpedoed Brendan Rodgers’ title charge with a 2-0 victory at Anfield as Chelsea boss in April 2014.

His record against the Reds in his last two Premier League jobs has seen him lose only twice.

He also registered a victory and three draws as Manchester United manager between 2016 and 2018 before a 3-1 defeat at Anfield ended his Old Trafford tenure.

Klopp recognised Mourinho’s defensive style, likely to be exacerbated by the loss of striker Harry Kane until April, ahead of their visit to the capital.

“A good, organised Tottenham side, yes, putting some emphasis on defending for sure,” said Klopp, whose runaway Premier League leaders will set a new all-time top-flight record of 20 wins and one draw from the opening 21 matches with a victory.

“It is a home game for Tottenham and usually you go there and it used to be like they create and try to dominate the game – not sure if someone sees that in the moment.

“A result is possible in different ways and we cannot be sure 100 per cent what they are going to do but we have signs.

“We have to think about what he did against us when he was with Man United but it cannot be the same as it is different players and we are a different opponent.

“Analysis always ends quite a way from the truth, from the reality, because we don’t know 100 per cent because they make their own decisions. But that is the same thing for us.

Where we're at ahead of the #PL weekend 📈 pic.twitter.com/lMDzEBun8Q— Premier League (@premierleague) January 10, 2020

Klopp said he respected the two-time Champions League and three-time Premier League winner but he did not view him as a more difficult opponent than any other he has faced in the Premier League.

He did joke, however, that he was probably a better player than Mourinho.

“Jose Mourinho is a world-class manager with a specific mindset I would say,” said the German.

“He wants to win with all he has. I respect that a lot. That means each situation his team is in, he tries to use for his team.

“I don’t want to create headlines but I don’t remember that we played a game in the last two or three years that I thought ‘thank God it’s him as a manager and not somebody else’. It’s just tough against all of them for really different reasons.

“Are Tottenham my preferred opponent this weekend? Probably not but I am not sure anyone wants to play against us in the moment.

“It’s tough against a Jose Mourinho team but the good news is – I’m not sure if he was a better footballer than I was – that the managers don’t play.

#LFC will be without James Milner and Naby Keita for the trip to @SpursOfficial this weekend… #TOTLIVhttps://t.co/Wz6X2QlxAm— Liverpool FC (@LFC) January 10, 2020

“I don’t know actually. Does anyone know what position Jose Mourinho played? Don’t blame me if you don’t know – don’t say ‘Klopp has no clue’. I think he was a goalkeeper.”

When it was pointed out Mourinho played in goal during the Grenfell Tower disaster charity match in 2017 and he was actually a midfielder with Rio Ave, Beleneses, Sesimbra and Comercio e Industria in Portugal, Klopp added: “You can play in goal if you can’t walk any more in a charity game!”

Joel Matip, out since October with a knee injury, and Xherdan Shaqiri returned to training this week with Fabinho, sidelined for six weeks also with a knee issue, and Dejan Lovren (hamstring) set to be back before next weekend’s visit of Manchester United.

However, James Milner (hamstring) and Naby Keita (groin) will miss at least the next two matches.