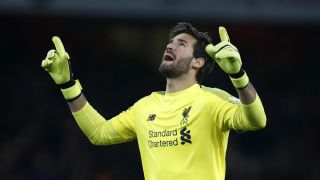 Jurgen Klopp would have paid double for Alisson if he knew just how good the goalkeeper was, he said after the Liverpool shot-stopper's heroics on Tuesday.

The Premier League outfit scraped into the Champions League knockout stage after a 1-0 win over Napoli at Anfield.

Mohamed Salah's first-half goal helped Liverpool finish second in Group C, although they needed a good save from Alisson to deny Arkadiusz Milik late on.

Alisson has starred this season and his latest incredible save pleased Klopp, who brought the goalkeeper to Anfield from Roma for a reported €72.5million in July.

"If I knew Alisson was this good, I would have paid double," the German said.

"The save Ali made, I have no words. It was a lifesaver. He did it. I never saw something similar."