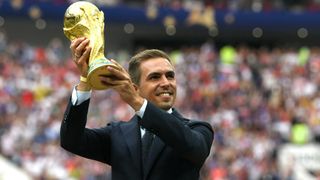 World Cup winner Philipp Lahm will head the organising committee for Euro 2024 if the tournament is staged in Germany, the German Football Association (DFB) has announced.

Having hosted the World Cup in 2006, the DFB are hoping to bring the European Championship to Germany in six years' time having submitted their bid along with an application from Turkey.

Lahm is already being lined up for a key role in any successful German bid, with the former Bayern Munich defender set to be the tournament's director.

"It was my desire to take on long-term responsibilities from the beginning as an ambassador for Euro 2024," Lahm said.

"The new role as a tournament director gives me a very interesting opportunity."

The vote to determine who will host Euro 2024 will take place next month.