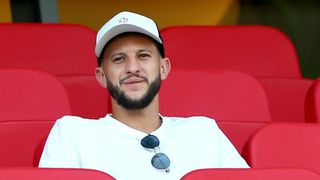 Adam Lallana still believes he has an England future despite Gareth Southgate not taking the Liverpool playmaker to the World Cup.

After an injury-hit season Lallana did not make the final 23-man squad, with England surprisingly reaching the semi-finals at Russia 2018.

The 30-year-old has won 34 England caps and is determined to battle his way back into Southgate's thoughts, with England in Nations League action in September.

"Of course it was frustrating because I wanted to be there [at the World Cup]. It is what it is," Lallana told reporters.

"Sometimes when you are a professional footballer, you have to deal with tough decisions. So I was just supporting them like any other fan.

"My best mate Jordan [Henderson] was there and he was one of the best players. It was great to see him do so well. The team got to a semi-final and it was a remarkable achievement."

Leading England to the last four of the World Cup - they lost in extra-time to Croatia - earned Southgate a nomination for FIFA Best Men's Coach award on Tuesday.

And Lallana has no complaints about the way Southgate handled his omission from the Russia 2018 touring squad.

"He has been absolutely brilliant. It probably wasn't a comfortable call for him but he made it, like he made it for the other lads who missed out," Lallana said of the England manager.

"I know that if my season was different and I had been fit, I would have been there. But it was probably the right call. He said you don't gain your form in a tournament, going on history and past experiences.

"Listen, the lads had a massive tournament but I am sure I have still got a lot to give. I will be there in the next camp."

Lallana's England and Liverpool team-mate Alex Oxlade-Chamberlain also missed the World Cup, with the versatile midfielder expected to be out for most of the 2018-19 season as he recovers from a knee injury sustained in the semi-finals of the Champions League.

"He's such a good kid. We obviously knew the full extent of the injury, more or less, when it happened," said Lallana. "We are friends, we are team-mates and he wanted to keep it all in-house. He wanted us to focus on the Champions League final.

"That shows he is not just focused on himself and what is best for him. He wants what is best for the team and there are so many players with that mindset in the squad. That is why we have been so successful. It is up to myself and the other lads to have a good season for him.

"It was the likes of him who had outstanding form in the Champions League and, as a result, I got to feature in the final. We are a team. When someone else is injured, they are the ones who motivate you. It’s not just for yourself – it’s for them."