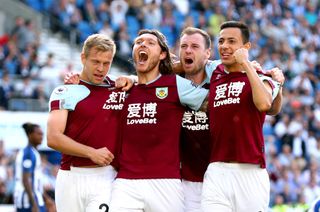 A late equaliser from Burnley’s Jeff Hendrick earned his side a 1-1 draw as Brighton’s winless streak at the Amex Stadium continued.

After a goalless first half Neal Maupay broke the deadlock, striking a superb volley from the edge of the box.

The Seagulls looked to be heading towards victory before the ball fell to Hendrick outside the box and he sent a powerful drive past the outstretched Mathew Ryan and into the bottom corner.

Brighton have not managed to win at home in the Premier League since their 1-0 victory over Huddersfield on March 2.

The south coast club have now lost five and drawn three of their last eight games at the Amex Stadium, leaking 17 goals while scoring just four as Graham Potter’s wait for a first home win goes on.

The early momentum went in favour of the visitors, and the Clarets came close to taking an early lead in the 16th minute when a Dwight McNeil cross was almost turned into his own net by Dan Burn after Adam Webster failed to clear the low ball.

Burnley had another chance minutes later when the ball fell to Jack Cork in the Brighton box, but he wasn’t able to control the direction of his volley, and sent the ball wide.

In their first good chance of the game, the home side worked the ball through the midfield to Burn, but Maupay could not fully control the ball and it went through to the goalkeeper.

Brighton grew into the game towards the end of the first 45 minutes, penning Burnley back inside their own half, and Clarets goalkeeper Nick Pope was called on to make two saves – from Solly March and Glenn Murray – to keep the score level.

The Seagulls started the second half in much the same way as they finished the first, and were rewarded for it in the 51st minute, when Maupay volleyed home a March cross to score his first home goal.

Davy Propper sent a header narrowly over the bar, as his side looked for their second to wrap up all three points.

A volley from Chris Wood almost levelled the score for Burnley against the run of play, after he stuck out a foot to try and divert Ashley Westwood’s bicycle kick towards the goal, and put it just wide of the post.

Brighton kept the intensity up, putting pressure on the Burnley defence to try and score a second, with substitute Aaron Connolly having one of the better chances in the 89th minute, but his effort went high and wide of the goal.

Against the run of play, however, substitute Jeff Hendrick equalised with his long-distance strike in the 91st minute.