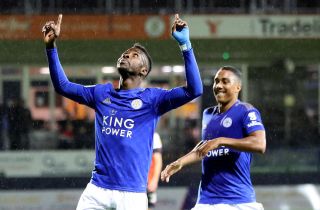 There will be no repeat of Burton’s fairytale run to the semi-finals of the Carabao Cup this season after Leicester eventually proved too strong at the Pirelli Stadium.

The League One side claimed famous victories against Aston Villa, Burnley, Nottingham Forest and Middlesbrough en route to the last four of the competition during the 2018/19 campaign, but there was to be no more giant-killing on Tuesday night.

Burton, who added Bournemouth to their growing list of scalps in the previous round, did pull a goal back through Liam Boyce early in the second half after strikes from Kelechi Iheanacho and Youri Tielemans had given Leicester a two-goal cushion at half-time.

Brendan Rodgers’ team were put under some intense pressure in the second half but survived several difficult spells and sealed a place in the quarter-finals for the third year in a row when substitute James Maddison struck in the final minute.

Iheanacho opened the scoring after seven minutes, finishing from close range following a fine move. Leicester carved through Burton, with Demarai Gray dribbling past two or three defenders before finding Tielemans out wide on the left with a lovely pass.

Tielemans hit a low, first-time cross into the box where Iheanacho beat goalkeeper Kieran O’Hara from six yards out.

Burton threatened for the first time after 18 minutes. A last-ditch sliding block by Wes Morgan repelled Boyce’s goalbound shot but the ball rebounded to Scott Fraser and his effort from the edge of the box clipped the outside of a post.

Leicester doubled their lead after 20 minutes with a goal made in Belgium. Dennis Praet made a driving run down the right and cut the ball back for the unmarked Tielemans, who steered a first-time shot into the bottom corner of the net.

The Premier League side looked to be in total control but Burton rallied and had chances either side of the break. Nathan Broadhead’s diving header brought a parrying save from Danny Ward.

The Leicester goalkeeper had to deny Broadhead again when the midfielder was through on goal, before John-Joe O’Toole put the rebound over the crossbar.

Burton got themselves back in the game with Boyce’s 20-yard shot. The Brewers’ tails were up and they came close to scoring a quick equaliser when Hamza Choudhury, a former loan player at the Pirelli Stadium, cleared Oliver Sarkic’s effort off the line.

The game was becoming end-to-end and O’Hara twice thwarted Marc Albrighton when one-on-one with the Leicester attacker.

Ward was called into action again midway through the second half to help a fiercely-struck volley from Fraser over the crossbar.

Jonny Evans saw a header blocked on the line by Kieran Wallace before substitute Maddison settled the visitor’s nerves in the final minute after being set up by Gray.