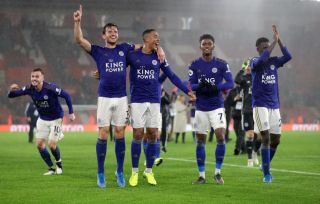 During a history-making night on the south coast, Saints defender Ryan Bertrand became the first top-flight player sent off following a VAR review after a dangerous lunge at Perez in the build-up to Chilwell’s 10th-minute opener.

The early dismissal undoubtedly had a significant impact on the home side’s fortunes but it could not excuse the embarrassing – and record-breaking – capitulation which followed.

Southampton’s previous worst defeats on home soil were 6-0 reversals to Plymouth in 1931 and Brentford in 1959. The thumping loss also surpassed three 8-0 defeats on the road, the most recent of which came against Everton in 1971.

At his pre-match press conference, Southampton boss Ralph Hasenhuttl had called his side to grind out a “dirty win” to give their success-starved home fans a first win on home soil since mid-April.

But their hopes of doing so were dealt a hammer blow during a dramatic couple of minutes which saw them fall behind and reduced to 10 men.

With the Foxes still celebrating, Saints’ misery was quickly compounded as referee Andre Marriner was advised by the VAR to show a deserved red card to Bertrand for desperate studs-up lunge at Perez in the build-up.

Replays of the challenge left Southampton with little to complain about and the game quickly ran away from them in remarkable fashion.

Leicester, who had dominated possession before Bertrand’s dismissal, doubled their advantage in the 17th minute when Tielemans fired a low shot past Gunn after Yan Valery had inadvertently diverted the ball into his path.

Boos rang around the ground just seconds later when Perez broke into the box by stylishly exchanging passes with Tielemans before skidding a low shot off the sodden surface and past Gunn at the near post.

Imposing Leicester were in no mood to take pity on their stunned hosts and, after Valery tested Foxes keeper Kasper Schmeichel during a rare home attack, they turned the screw with two more first-half goals.

Perez emphatically claimed his second in 39th minute by connecting with Chilwell’s deep cross from the left to thump a close-range half-volley into the roof of the net.

Former England striker Vardy brought more jeers from the stands in the final minute of the half by easily slipping inside Maya Yoshida and smashing the ball beyond Gunn.

The jubilant away end showed little sympathy with chants of ‘Oh when the Saints go marching out’ as Southampton fans left their seats in droves for much-needed refreshment or, in many cases, an early exit.

Damage limitation was very much on the mind of Hasenhuttl as he brought on defenders Kevin Danso and Jack Stephens at the break.

The alterations had little, if any, impact. Perez, who netted a hat-trick for Newcastle against Saints last season, claimed his treble by calmly chesting down a Barnes pass and volleying beyond Gunn in the 57th minute.

Seconds later the ball was in the same net again as the unmarked Vardy headed home a Chilwell cross.

Saints, who briefly threatened to pull one back through Nathan Redmond, had yet more torture to endure.

Maddison expertly curled home a 25-yard free-kick five minutes from time, before Vardy claimed his third from the penalty spot after being brought down by Jan Bednarek in stoppage time.