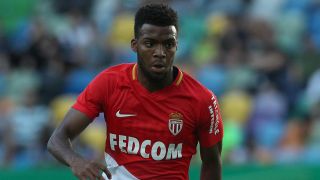 Thomas Lemar reaffirmed his commitment to French champions Monaco after a move to Arsenal failed to materialise.

Premier League outfit Arsenal reportedly made a bid upwards of £90million for Lemar but the transfer was called off on Thursday's deadline day.

Amid the transfer chaos, Lemar – also a target for Liverpool according to reports – scored a stunning goal in France's 4-0 rout of 10-man Netherlands in World Cup qualifying.

And the 21-year-old is glad to be returning to Stade Louis II after the international break.

"I am a player of Monaco, I am very happy there," Lemar told Canal +.

"Now I'm going to make a good season with my club, to try to progress and move forward in my career with Monaco.

"I prepared for this game as usual. I do not lose my head, even if there are rumours. I was focused on my game, that's all that mattered to me."

Lemar and Monaco – who lost Kylian Mbappe, Bernardo Silva, Benjamin Mendy and Tiemoue Bakayoko during the transfer window – have made a flawless start to their title defence in Ligue 1, winning four successive matches to open the season.