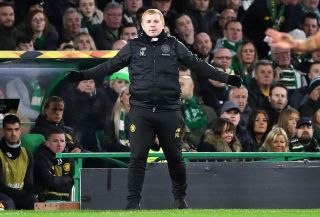 The Scottish champions maintained their position at the top of Group E with a dramatic 2-1 victory over the Serie A side thanks to a late header from French defender Christopher Jullien, after midfielder Ryan Christie had cancelled out a first-half goal from Manuel Lazzari.

Celtic moved on to seven points from three fixtures ahead of the return game in Rome in two weeks’ time.

Asked if 10 points would be enough to secure qualification, the Northern Irishman, now preparing for the trip to Aberdeen in the Ladbrokes Premiership on Sunday, said: “You would like to think so because you always feel that other clubs would take points off each other.

“What we have done is made a great start to the group and I can’t ask any more than maximum points at home and picking up a point away from home.

“There is no guarantee of us picking up another point in the group so we have to calm down.

“We have enjoyed the night. It was a titanic game and one that we want to bring to Celtic Park on a regular basis but we have to regroup now and we have a big game on Sunday to concentrate on.”

Lennon gave himself only a “couple of hours” to enjoy the win before thinking about the Dons and staying top of the table.

He said: “I don’t know how the players are feeling about it. We have a lot of experienced players in there so they will know how to deal with it.

“It can be a bit unfair that you don’t get more time to lap it up because it was a great night and a titanic game.

“It had a bit of everything and the players can take an enormous amount of personal satisfaction from the way they handled it.”

Lennon, however, conceded that the victory was a reminder there is life in Scottish football.

The former Celtic skipper said: “Very much so. We are alive and kicking. We want to make inroads in this group.

Lennon admits he is wary of Derek McInnes’s Aberdeen, who are coming off a terrific 3-0 win at Motherwell.

He said: “The quality of the goals they scored against Motherwell, who were flying, that is a really impressive result.

“It doesn’t surprise me with him and Tony (Docherty, assistant) and the way they have managed that club over the past few years has been so impressive.

“They are getting their reward for showing patience with (Sam) Cosgrove and the likes of Niall McGinn is still there and experienced players allied with some new faces.

“Every year Derek has to evolve the team and all of a sudden they are starting to find their gears again, which is a concern for me obviously.”