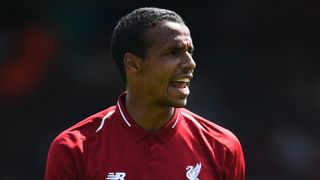 Jurgen Klopp revealed Liverpool defender Joel Matip suffered a "only a little tear" in his thigh muscle in Sunday's friendly against Borussia Dortmund.

The centre-back was withdrawn midway through the first half of his side's 3-1 defeat in the International Champions Cup clash in Charlotte.

The sight of Matip limping off sparked fears he had suffered a reoccurrence of the thigh injury which ruled him out of the latter stages of the 2017-18 season, including the Champions League final.

While Klopp confirmed that was not the case, the German conceded the severity of the setback was unclear at this stage.

"It's not the same injury, it's another muscle, but it's a muscle, obviously. It looks like, hopefully, only a little tear," the Liverpool manager said.

"We cannot say more about this now, but that's of course the most negative thing about the day. It's not cool.

"These things can happen but you don't want them to happen. Maybe tomorrow or the day after tomorrow, we will know more. At this moment we only know that it was too painful to carry on."

Mohamed Salah meets the fans after our friendly. July 23, 2018

Matip's fitness is a concern ahead of the new season, with Liverpool hosting West Ham in their Premier League opener on August 12.

Klopp was more upbeat over Daniel Sturridge, however, as the forward impressed in his 45-minute outing against Dortmund.

The Reds boss suggested the 28-year-old, who spent the second half of last season on loan at West Brom, still has an important role to play at Anfield.

"Who doubts Daniel Sturridge when he is fit? I don't. Outstanding player, hopefully he can stay fit and then the future is bright," Klopp said.

"He's young enough, it’s not like he's 30-something. He’s still in his 20s, so that's good. He’'s experienced as well, and has this kind of natural arrogance on the pitch which is good.

"If he tries something and it doesn't come off, he is not out of the game for 10 minutes. He stays in the game, and it is good for us to have him around."