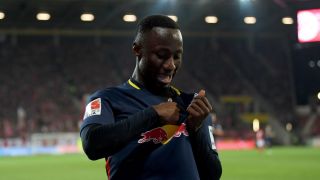 Liverpool target Naby Keita is not expected to renew his RB Leipzig contract, according to sporting director Ralf Rangnick, potentially opening to door to a €50million exit in 2018.

After a stellar first season in the Bundesliga, Keita has been heavily linked with a switch to Liverpool and Leipzig last month confirmed they had rejected a bid of €75m for the midfielder.

The Guinea international is contracted to the German side until 2020, but reports in Germany claim a €50m release clause in his existing deal will become active at the conclusion of the upcoming season.

Rangnick admits it is unlikely Leipzig will tie Keita down to new terms beforehand, but reiterated the player will not be leaving in this transfer window.

"I am not currently assuming that we will be able to extend his contract prematurely," Rangnick told Sport Bild.

"I can assure you that Naby will be playing with us this season. All other scenarios also depend on how we do this season, how Naby plays himself and so on."

Having secured a place in the Champions League by finishing second to Bayern Munich in their maiden Bundesliga campaign, an unwillingness to part with their prized assets before a landmark season is behind their staunch opposition to letting Keita go.

Rangnick said: "It does not matter at all whether it's 75million or 100million euros. We have not developed for five years so that we can lose one of our best players in the first Champions League season.

"That would make no sense. We want to be successful in sports."