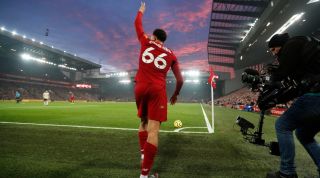 Glen Johnson believes Trent Alexander-Arnold has the potential to match full back greats like Cafu and Dani Alves in the years to come.

Alexander-Arnold has been in superb form for Liverpool this season, developing into one of the best full backs in the world at the age of just 21.

Johnson was one of Alexander-Arnold’s predecessors at right back at Anfield, and has been hugely impressed by what he’s seen of the academy graduate - believing the England international could develop into one of the modern greats in that position, alongside the likes of Cafu and Alves.

“It all depends on how he develops over the next couple of years, but potentially, 100 per cent he can do that,” Johnson told FourFourTwo. “He plays like he’s been in the Premier League for 10 years, which is great credit to him and his mentality.

“He’s a good free kick taker, and his in-play crossing is brilliant. Some people can get into dangerous positions, but all they want to do is hit it as hard as they can across the goal. He puts the pace on the ball when he needs to, and he also takes some off when he needs to. He’s very smart.

“His attributes are going forward but he’s improved everywhere, defensively as well, which you will do as you get older and learn the game.”

Such has been Alexander-Arnold’s rate of progress, he’s already a contender to be the best full back in the world.

* Glen Johnson is an ambassador for the BETDAQ sportsbook. Read all of Glen’s views on all of football’s hot topics at http://www.betdaqtips.com/