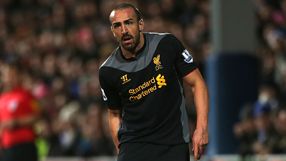 The Spanish left-back was injured during his side's 3-0 victory against Queens Park Rangers last week.

"He has looked fantastic in the games but it looks like he'll probably be out for up to six weeks with his hamstring," Rodgers told the club's website.

"It's a shame because in the game he felt nothing. Sometimes you can enter the games and be tight and stiff. He felt great, and even within the game."

Enrique has made 61 appearances for Liverpool since joining from Newcastle United in 2011.