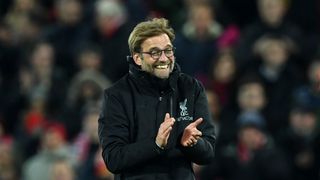 Jurgen Klopp says it is not easy for Liverpool to challenge for the Premier League title after a number of difficult seasons because of the continual development of their rivals.

Klopp's arrival at Anfield during the 2015-16 campaign boosted hopes that Liverpool could at last end their title drought, having not won the league since 1989-90.

Liverpool appeared to be Chelsea's main rival for the title this term after a good start to 2016-17, but a poor run of form in January has seen them drop to fourth place in the table, 10 points behind the leaders.

Their recent slump has led to criticism of Klopp, yet the Liverpool boss remains optimistic about his side's chances of winning silverware in the not too distant future.

"You all know better than me about this club and what happened the last few years," Klopp stated at a news conference.

"When we started here everyone was hoping it happened immediately. We improved a lot but the problem is other teams do not sleep. The fight for something is always tight and intense.

"I love being here, I know it is a real challenge to be successful in this league.

"Everyone has an opinion, but we have to stay concentrated and do the job. The day is not long enough to do what other people want.

"Even when you are a perfect side, and we are not, you will lose football games. But we have proved often enough that we know the way. We are still not too bad, so let's go for it."