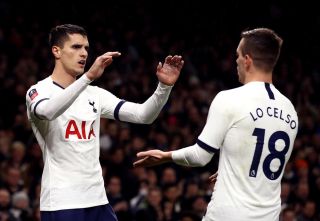 Tottenham rolled back the years as a pair of Argentinians delivered a 2-1 FA Cup victory in their third-round replay against Middlesbrough.

In days gone by, the old White Hart Lane was treated to some memorable nights as Ossie Ardiles and Ricky Villa had a love affair with the famous cup competition.

This time it was Giovani Lo Celso and Erik Lamela who inspired Spurs with first-half goals that set up a meeting with Southampton in next weekend’s fourth round.

This win over Championship opposition, who made a game of it late on through George Saville, is unlikely to be remembered other than for being the first FA Cup game at Tottenham’s new stadium and their first in N17 since 2017.

It also ended a four-game winless run in all competitions and further highlighted how Lo Celso and Lamela could become key men in Jose Mourinho’s reign.

They added impetus off the bench in the previous two matches and, rewarded with starts, again lifted Spurs with energy and desire.

Mourinho, who has admitted he will be going all out to win the FA Cup this year, will not get carried away with the victory but it could provide a starting point for his side going into a crucial part of the season.

Given their recent struggles, on the list of things Mourinho would have wanted most, an early goal would have surely been top and he got lucky thanks to some reckless passing out from the back by Boro.

In just the second minute, goalkeeper Tomas Mejias tried to pass to Marvin Johnson but Lo Celso intercepted and coolly converted into the bottom corner.

It gave Spurs just the platform they needed, though they nearly wasted it as Boro should have levelled in the 13th minute.

Davinson Sanchez gave the ball away in a dangerous area and Lukas Nmecha worked himself some space in the box and looked destined to score, but Paulo Gazzaniga got down well to palm the ball away.

That miss took only three minutes to prove costly as Spurs doubled the lead.

Lamela showed tenacity to rob Jonny Howson and then skill to breeze past two defenders before coolly rolling the ball home with the outside of his foot.

The fact that Spurs were not at least 5-0 up at the break was only down to some poor finishing as they cut Middlesbrough open at will and created a glut of chances.

Lamela fired over on the turn, Ryan Sessegnon saw a low drive tipped around the post, Japhet Tanganga drilled wide, Christian Eriksen saw a free-kick saved and then Lucas Moura could not find the target after a lightning-quick break.

Spurs struggled to recreate that verve and intensity after the break and Middlesbrough were the ones with the chances.

Gazzaniga was again alert to a low free-kick from Lewis Wing that was creeping in but the goalkeeper was at fault for allowing Spurs to endure a needlessly nervy last 10 minutes.

Sanchez and Tanganga backed off Saville and his low shot from 20 yards should have been kept out by Gazzaniga, who got a hand on the low shot.

Spurs were able to see it out with relative ease and could even have extended their lead, but Son Heung-min could not convert after Tanganga’s storming run and cross and fellow substitute Dele Alli wasted a chance from the last kick.