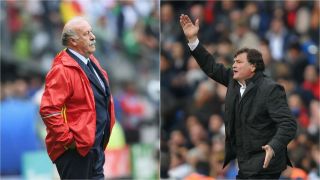 Real Madrid interrupted Spain's World Cup preparations on Tuesday to announce that head coach Julen Lopetegui will head to the Santiago Bernabeu at the conclusion of the tournament.

Spain have floundered at the last two major events, but won each of Euro 2008, World Cup 2010 and Euro 2012, with Lopetegui now building a group that looks primed for a serious challenge in Russia.

However, it is now or never for the former Under-21s coach if he is to taste success with his country before returning to club management.

Lopetegui is not the first to have tried their hand at both the Spain and Madrid jobs. Omnisport assesses how some of the others have fared...

Villalonga was the first coach to enjoy lengthy spells in charge of both the capital club and the national side, taking the former job in his mid-thirties.

And for a long time, Villalonga was the most successful man to have taken on both roles. With Madrid, able to call on the likes of Alfredo Di Stéfano, Francisco 'Paco' Gento, Miguel Munoz and Raymond Kopa, he won the club's first two European Cups, along with a pair of LaLiga titles.

Then came glory with Spain. Victory at the 1964 European Championships was the only silverware the country would have to celebrate until 2008.

Following in the footsteps of former coach Villalonga, Munoz was another roaring success as Madrid boss. As the club's most successful coach, he won two European Cups, adding to his three as a player, and in doing so became the first man to triumph in both roles. He also secured two Copa del Rey titles, one Intercontinental Cup and a remarkable nine Liga crowns.

Two stints with Spain - one while still at Madrid - could not match the 1964 team's glory, but they came close. La Roja fell at the last hurdle at Euro 1984, losing to hosts France in the final. Munoz then guided his country to the last eight of the World Cup, before departing in 1988.

Lopetegui will certainly hope to avoid a repeat of Camacho's Madrid tenures. The former defender enjoyed success with the European giants as a player, but two ill-fated spells as a coach left a sour taste.

Camacho initially took charge of Madrid in the 1998 off-season but quickly departed without overseeing a competitive fixture, citing a lack of confidence from the board. He was soon appointed as Spain boss and oversaw a run to the last eight of Euro 2000, but the same return at the World Cup - after a controversial defeat to South Korea - represented a big disappointment.

As Madrid raced through coaching options in the mid-2000s, Camacho was handed another opportunity. He lasted just six miserable matches.

The man who Lopetegui replaced in the Spain hotseat perhaps provides the best guide in how to do both jobs successfully.

As a young coach, Del Bosque enjoyed brief spells in charge of Madrid in 1994 and 1996, before finally being handed a prolonged chance as the Galacticos came together at the turn of the century. Luis Figo, Zinedine Zidane and Ronaldo were among those to star as the club collected another pair of Champions League titles.

Even with this impressive record, succeeding Luis Aragones as Spain boss was no simple task. After Euro 2008 glory, Del Bosque was able to keep the squad working in the same direction - introducing Gerard Pique and Sergio Busquets among others - and finally lifted the World Cup before overseeing another European Championship triumph

Del Bosque retires and we wanted to pay tribute with this video, which you can't miss November 29, 2016