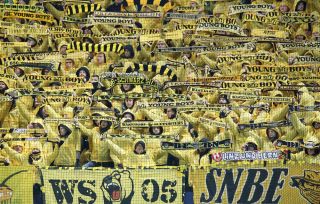 Rangers travel to Switzerland to take on Young Boys looking to maintain their 100 per cent record in Europa League Group G.

Here, the PA news agency takes a closer look at the Swiss champions.

Gerardo Seoane has been in charge of Young Boys since 2018 when he was handed the reins after impressing during his short stint at Luzern – the club where he started and finished his playing career. His first coaching role was with Luzern’s Under-15s in 2011 and he rose through the ranks before being given the top job of his home-town club in January 2018. He guided Luzern to a third-place finish and was taken on by champions Young Boys following Adi Hutter’s departure. Seoane delivered another league title in his first campaign at the Young Boys helm.

Former Celtic defender Saidy Janko now plies his trade at Young Boys, where he is currently on loan from Porto. The Swiss wide man made 20 appearances in all competitions for Rangers’ fierce rivals between 2015 and 2017 before moving on to St Etienne.

Young Boys have made an unbeaten start to the Swiss Super League season, winning five and drawing four of their nine games so far to sit second in the table. The Swiss champions won just one of their league matches in September, though, and they were beaten 2-1 by Porto in their Europa League group opener.

Young Boys reached the Champions League group stage last season but finished bottom of a heavyweight pool containing Juventus, Manchester United and Valencia. They did, however, hold Valencia to a 1-1 draw before beating Juventus 2-1 at home in their final group game. Their best season in Europe came in 1958-59 when they got to the semi-finals of the European Cup.