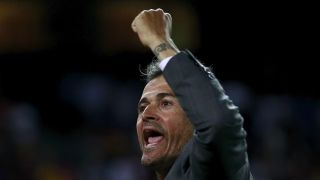 Luis Enrique is excited by the challenge of taking charge of Spain following a year out of the game after his Barcelona departure.

Luis Enrique takes the Spain job as the permanent successor to Julen Lopetegui, who was sacked on the eve of the World Cup after it was announced he was taking over at Real Madrid following the tournament.

Fernando Hierro took charge at Russia 2018 but could only lead Spain to a last-16 exit on penalties to the hosts, a second successive disappointing World Cup for the 2010 champions.

And after a year's sabbatical, Luis Enrique is ready to return to management with the national team.

"I am very excited, after having the opportunity to defend the shirt of the national team and suffer with it," he told Cuatro.

"I am happy and very excited to have the opportunity to be a coach now."

Luis Enrique's appointment has not been universally praised in Spain, with detractors noting his uneasy relationship with the media.

"I know that criticism is something attached to any position in our country and I'm ready for it," he said.

"I will treat you [the media] as you deserve. I am 48 and it is difficult to change, I am happy with what I have done so far and I will not change."

Of accusations he is anti-Real Madrid, Luis Enrique added: "I would tell them that I love them very much and I am open to give my best version."