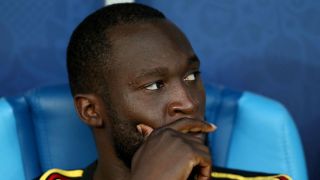 Manchester United striker Lukaku scored twice against both Panama and Tunisia but sat out the Group G finale against England due to an ankle injury.

Vermaelen made his first appearance in Russia in the 1-0 victory over England, but was left bloodied after a clash of heads with Jamie Vardy in the second half.

The Barcelona centre-back was able to continue before making way for Kompany, who had been sidelined by a groin injury suffered in a friendly fixture against Portugal prior to the tournament.

"Romelu Lukaku is fine, he's fully fit. He completed the training session today [Friday] so he's got no problems. He should be available," said Martinez.

"Thomas Vermaelen had a nasty knock in his eye, looked like a boxer this morning so I think he forgot about all his previous problems. Apart from his eye - his vision is not perfect at the moment because of the inflammation - he'll be fine and will be perfect to train tomorrow.

"Vincent Kompany reacted very well to his 20 minutes – that was always the plan. He is now fully fit and available for selection.

"We had to rely on our medical department to make big calls on players who weren't fit for the start of the World Cup.

"There's satisfaction to see all their work, to see Thomas Vermaelen playing like he's never been away, to see Vincent Kompany arriving and performing for 20 minutes at the level that was required."

Marouane Fellaini came in as one of nine changes made by Martinez for the clash against England.

Thibaut Courtois also faced the media on Friday and was asked for his thoughts on compatriot Fellaini, who was handed a new two-year contract by Manchester United.

"Well I think Marouane is a player that often is criticised by a lot of fans, but I think he's a very useful player. You can always kick a long ball to him, he's strong, he can keep the ball," said Courtois.

"I think yesterday showed he can dribble, he passed some defenders as well. I think he's a very useful player. I don't say you will need him every game, I think managers decide, obviously, it depends on what kind of opponent they face, but I think he's a very good to have in your team.

"I said when Chelsea played, for example, against Manchester [United] this year and we were winning 1-0, he came on, I didn't like seeing him on the pitch because I knew they would put balls into the box, and he will have a header or he will deflect the ball to another guy.

"You always have to be very careful when he's on the pitch, so I think he's a very useful player."