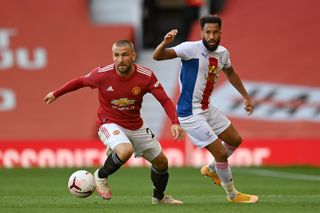 Luke Shaw has called on Manchester United to bring in more players before the transfer window closes.

Donny Van De Beek, who scored United’s goal in their 3-1 loss to Crystal Palace on Saturday, remains the club’s only summer signing.

United started their Premier League season a week late following their Europa League involvement and were caught cold in a disappointing display.

Shaw told TV2 in comments reported by the Manchester Evening News: “We have a very good group but, personally, I think we need more players to strengthen the squad.

“It can give us a boost. When you look around at how other teams are strengthening their teams, then we must also do it to keep up with the others.”

United’s positive end to last season, securing Champions League football, boosted optimism of a possible title challenge this time around but they will need to perform a lot better than they did against Palace.

Shaw cited a truncated pre-season as one factor behind the slow start.

The left-back said: “Personally, from my point of view, the pre-season that we’ve had altogether is not the correct way it should have been. We’ve had a week all together.

“My first day back training, I could have probably counted on one hand the number of people who were training. Look at teams who have been together a while, training, playing games. I think Palace have played quite a few more games than us and it showed. We lacked that fitness and confidence.

“We haven’t been able to prepare in the way that we wanted and that’s not an excuse, because we have the quality of players to be able to win games like this, but we weren’t up to it and we’ve been punished. It’s the start of a new season, we should have been fresh.”

United face Luton in the Carabao Cup on Tuesday before resuming their Premier League campaign with a trip to Brighton next Saturday.