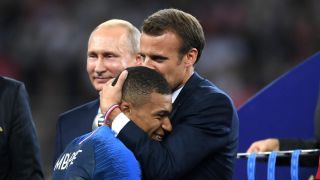 The World Cup heroes of France will be greeted by president Emmanuel Macron after an open-top bus parade along the Champs Elysees to celebrate the team's triumph in Russia.

As the country wakes up to the reality of a second World Cup win, head coach Didier Deschamps and his players are travelling home as champions after beating Croatia 4-2 in one of the most eventful and entertaining finals in the tournament's history.

For Deschamps, the scenes in Paris will bring back memories of 1998, when he captained Les Bleus to their first success on the game's biggest stage to make national icons of players like Zinedine Zidane, Lilian Thuram and Frank Leboeuf.

The 2018 team will arrive at Charles de Gaulle airport on Monday afternoon, where the city's firemen will perform a 'water salute' by hosing down the plane carrying the players and their trophy.

"This is amazing, it's the pinnacle: France are on top of the world!" heard from -winning coach Didier Deschamps & Co as they celebrated in the bowels of Luzhniki Stadium July 16, 2018

From there, Deschamps will take his men to the Champs Elysees in central Paris to parade the trophy to the large crowds expected to gather.

President Macron, who was present in Moscow for the final and the rain-soaked trophy presentation, will welcome the team at the end of their journey.