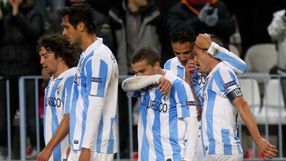 Malaga, who have reached the last 16 of the Champions League, have been punished for unpaid bills as European football's governing body (UEFA) gets tough on finances.

The ban does not apply this season but would take effect the next time that the Qatari-owned club qualified for European competition in the next four years.

"Following a comprehensive review of the decision, Malaga reiterate the message that they are in absolute compliance of the 'Financial Fair Play' rules," the club, who lie fifth in La Liga, said in a statement on their website.

"Making full use of their rights, and with the intention to demonstrate this absolute compliance in front of a tribunal, the club will appeal the decision to the Court of Arbitration for Sport.

"Out of respect for the appeals process, and to follow the proper conduct of the competitions that the club's teams are involved in, Malaga will not assess the content of the reasoning behind UEFA's decision received yesterday, until the case has been settled."

The UEFA ban will be extended for a further season unless Malaga can prove by the end of March that they have settled outstanding payments to other teams, staff and tax authorities. Malaga have also been fined 300,000 euros.

Last month, the club said they were poised to reach an agreement with the Spanish tax authorities on outstanding payments as funds previously blocked by UEFA had been released.

Cash owed to La Liga rivals Osasuna and Malaga's own players was also being paid off according to plan, the club said.

The punishments meted out to Malaga and seven other clubs have underlined that UEFA is serious about enforcing Financial Fair Play rules that are being phased in.

UEFA's rules mean that all clubs will ultimately have to move towards balancing their books or face exclusion from European competition.