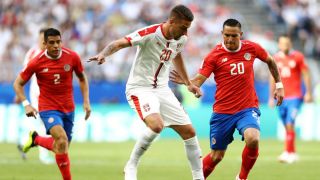 Sergej Milinkovic-Savic will not let the rumours regarding his future have an adverse effect on Serbia's World Cup campaign, according to Dusan Tadic.

Both men featured as Serbia got off to a winning start by defeating Costa Rica 1-0 in their Group E opener in Samara on Sunday, Aleksandar Kolarov's stunning free-kick proving the difference.

Milinkovic-Savic posed a constant threat and provided further evidence of the talent that has seen the 23-year-old Lazio midfielder heavily linked with the likes of Manchester United and Real Madrid.

But Southampton winger Tadic says his team-mate will not become distracted by any transfer talk during Serbia's time in Russia.

"He is a good player, he is young. He can learn a lot of things but he has a big talent," Tadic said.

"He has the capacity to go far. That's it. He is the future of Serbian football.

"I say to him to just be calm and work smart and he does. He needs to work for his team and then after he can show his qualities.

"I think he is a clever guy. He is a good boy and he just needs to keep his head calm [despite the rumours]. There is a big future for him."