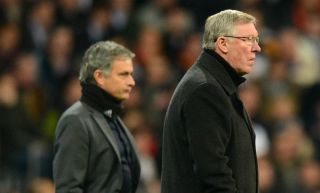 Jose Mourinho says Manchester United are "confident" of a swift recovery for Alex Ferguson as the legendary manager remains in hospital following a brain haemorrhage.

No medical update has been released since the 76-year-old underwent emergency surgery on Saturday, having fallen ill a day earlier.

But while he was hesitant to offer details, Mourinho did say the latest information he has received is encouraging.

The pair had been together in public less than a week before news emerged of Ferguson's condition, as they presented outgoing Arsenal manager Arsene Wenger with a gift during the Premier League match at Old Trafford on April 29.

Jose on Sir Alex: "His family asked for privacy and that is what I am going to respect. But [as a club] we are positive. We are very, very positive." May 9, 2018

"It's private. His family asked for privacy and that's what I'm going to respect," Mourinho said.

"[The club] are positive, they are very positive. We are confident."

Asked how Ferguson's situation has affected the mood at the club, Mourinho added: "I can only think that if there is any relation, there is a positive relation."

The Red Devils visit West Ham in their penultimate league match of the season on Thursday.