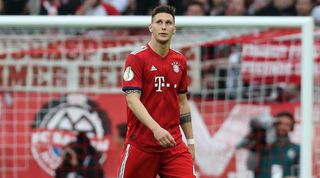 According to Sport1 (via The Mirror), United have made contact with Bayern over a possible transfer of the German centre-back.

Ole Gunnar Solskjaer is believed to have made it clear to Ed Woodward that he doesn't want a repeat of last summer, where United failed to sign a defender.

United have been linked to a host of Europe's top centre-backs, and Süle is the latest to have been approached.

Bayern signed Süle for £21m from Hoffenheim two years ago, but the 23-year-old has three years remaining on his deal, meaning it will take a substantial bid to prise him away.

A starting offer of about £40m is reported to be a sensible starting point.

Kalidou Koulibaly, who has been linked to United this summer, is still unsure about his future, while Mathjiis de Ligt of Ajax is reportedly close to agreeing a move to Barcelona.

With the market shrinking somewhat, United are keen to make progress in their hunt for defenders.