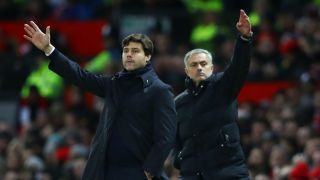 Jose Mourinho might have allowed himself a wry smile when West Ham completed an improbable 3-2 EFL Cup comeback to sink Tottenham at Wembley on Wednesday.

Mourinho's Manchester United host Mauricio Pochettino and Spurs in this weekend's standout fixture - a battle of second versus third, of 20 points apiece in an already intriguing battle for Premier League glory and of grizzled elite tactician against continually rising star.

Until finding the embattled Hammers in belligerent mood against his rotated midweek line-up, Pochettino was in the midst of one of those golden periods enjoyed by coaches when their reputations are on a dizzying upward trajectory.

Each selection call and tactical tweak has seemed to unerringly hit the mark for the Tottenham boss of late - from prompting raised eyebrows by thrusting Fernando Llorente into the starting line-up for last week's 1-1 draw at Real Madrid, to replacing the Spanish target man with Son Heung-min for the tirelessly waspish South Korea forward to wreak havoc in the 4-1 thrashing of Liverpool.

Mourinho knew such times better than most more than a decade ago, when he made an unfancied Porto European champions before swaggering into a Premier League he tamed with ease.

Now, he is demonstrably a manager at a different stage of his career. Credentials hard won and proved beyond doubt, but the hair greyer and the temper shorter.

Although Pochettino is, somewhat surprisingly, the one more likely to engage in a public spat with Pep Guardiola nowadays, his news conferences are often peppered with chuckles. Humour has more or less disappeared from view behind the Mourinho siege mentality.

This is not to say Pochettino lacks a fierce competitive edge or carries naivety in the face of the crushing disappointments top-level football can dish out.

In each of the past two seasons, Tottenham have been in contention for the biggest prize, only to fall short in the final stretch. They have been involved in two more Premier League title races than Manchester United during that time.

Since his arrival at White Hart Lane for the 2014-15 season, Pochettino has claimed 240 points from 123 Premier League games. Only Chelsea – champions in two of the three completed seasons - and current leaders Manchester City have more.

Manchester United are 15 points worse off than Spurs over this period despite having reportedly double the wage bill. Their hard spending includes the cash thrown at off-the-rail elite coaches such as Mourinho and Louis van Gaal.

The idealism immediately following Alex Ferguson's glorious reign, when David Moyes was granted a six-year contract on the basis of his own presumed potential and a board keen to do things "the United Way", evaporated as the ignominy of a seventh-place finish festered.

When United appointed the veteran Van Gaal in 2014, Tottenham entrusted Pochettino with the time to build and mould a squad in his own image. All the same promises that soothed Moyes came without the unrelenting scrutiny under which he buckled.

The 45-year-old Argentinian was mentioned in dispatches as United set their heart upon Mourinho in 2016 but, as Spurs prepare for their latest trip, it is tempting to wonder what Pochettino might have built over the recent period at Old Trafford.

While many have argued over whether the modern United conform to an expected footballing identity, Pochettino has gone about fashioning an ever-improving Tottenham side that is unquestionably his own.

United's recent wobble reopened questions over whether Mourinho still has the capacity for something more than the quick fix of an early trophy or two. Can he build something stable and enduring, or must these later chapters of his career bounce between success and confrontation until employers tire of the repetition?

Pochettino, his Spurs masterpiece close to being fully formed, had an untimely reminder last time out that opportunities to claim the silverware Mourinho has amassed slip away far more easily than they are grasped.

Nevertheless, former Paris Saint-Germain captain Pochettino will probably not need to bat his eyelashes the next time that job comes up as Mourinho did this week. As he heads for the top of the game, United might come to regret playing it safe and not taking a chance.