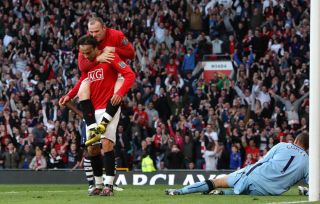 Manchester United suffered a 3-1 loss in the first leg of their Carabao Cup semi-final tie with derby rivals Manchester City on Tuesday night.

They now need to pull off an impressive second-leg comeback to make the Wembley final.

Here, PA news agency looks at six times United have turned the tables on their opponents.

Current manager Ole Gunnar Solskjaer sealed a place in United folklore when he scored the second of two stoppage-time goals to snatch United the Champions League title in 1999. Bayern Munich took control of the game after a sixth-minute opener, outplaying Sir Alex Ferguson’s side until the match rolled into time added on. Teddy Sheringham, on as a substitute, grabbed an equaliser in the first minute of stoppage time, with fellow sub Solskjaer scoring a winner two minutes later to earn United the ‘treble’ – Premier League, FA Cup and Champions League titles in the same season.

United had been written off heading into the second leg of their Champions League clash in Paris following a convincing 2-0 win for PSG at Old Trafford in the first game. But Solskjaer, then interim boss, did his chances of landing the job permanently no harm at all by masterminding a 3-1 second-leg success to see the Red Devils progress. Romelu Lukaku got United off to a flying start with a goal after two minutes, and after Juan Bernat had strengthened Paris St Germain’s position with an equaliser, Lukaku scored again. Marcus Rashford held his nerve from the penalty spot in stoppage time to make it 3-1 and send United through on away goals.

Tottenham fans surely considered victory a foregone conclusion when they raced into a 3-0 half-time lead. But Andy Cole started to chip away at that lead early in the second half, with Laurent Blanc and Ruud Van Nistelrooy hauling the Red Devils level with 18 minutes remaining. A Juan Sebastian Veron strike put United in front for the first time before David Beckham sealed a stunning win with a fifth goal three minutes from time.

It had been four years without a Premier League title for United, who needed a win at Goodison Park to pull away from defending champions Chelsea. Victory looked unlikely when Everton made it 2-0 after 50 minutes, but a John O’Shea strike offered hope and former United defender Phil Neville’s own goal equalised. Wayne Rooney scored United’s third against his former club and Chris Eagles added gloss to the scoreline at the death to seal a crucial win on the way to the club’s ninth Premier League title.

Trailing 2-0 at the break after a dominant first half from Spurs, United turned the game on its head in the second half, mounting another remarkable comeback against the Londoners. A Cristiano Ronaldo penalty was the trigger, with a brace from Rooney and second Ronaldo goal pulling them clear. Dimitar Berbatov sealed victory in the 79th minute, with United going on to secure an 11th Premier League title.

Two goals down at half-time following Mark Noble’s double, United were struggling against the Hammers and were fortunate to keep 11 players on the pitch when Nemanja Vidic avoided a red card. Rooney kick-started a revival in the second half, however, scoring twice in eight minutes before adding a penalty six minutes later to complete his hat-trick. Victory was sealed by Javier Hernandez, who came off the bench to grab a fourth goal.