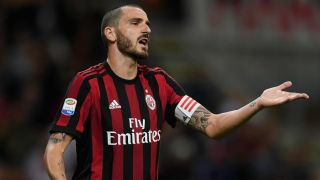 Milan pulled off a coup in the off-season, prising Italy international defender Bonucci away from champions Juventus in a €42million deal.

The 30-year-old has not fully settled into his surroundings as Vincenzo Montella's new-look Milan struggle for consistency, having already lost two of their opening six Serie A games this season.

And Marino feels Milan – who signed forwards Andre Silva and Nikola Kalinic for 2017-18 – would have benefited more from investing the Bonucci money in attack.

"Montella didn't want to switch to a three-man defence, but he found himself forced to change his plans by the arrival of Bonucci, but even that is not enough.

"I think that if Massimiliano Mirabelli and Marco Fassone could go back in time, they'd spend that money to buy Bonucci on a top striker instead."