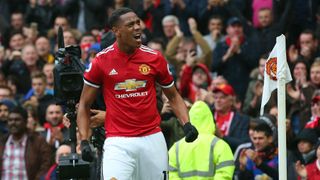 Manchester United great Gary Neville has accused Anthony Martial of only ever playing at "85 per cent" of his ability.

The 21-year-old was the hero for the home side at Old Trafford on Saturday, coming off the bench to score the only goal in the 1-0 win over Tottenham.

Martial enjoyed an explosive first season for United in 2015-16 after signing from Monaco but struggled to convince manager Jose Mourinho to give him a regular starting spot last term.

The forward has enjoyed an encouraging start to the campaign, scoring six times and registering six assists in 14 appearances in all competitions, seven of which have been as a substitute.

Neville thinks Martial has the talent to be "tearing this league apart" but thinks Mourinho and France head coach Didier Deschamps have identified a problem in his attitude.

"It's been a stop-start Manchester United career for Martial," he told The Gary Neville Podcast.

"For someone of his talent, he should be tearing this league apart with his ability. He's lost his place in the France squad. There's obviously something wrong with him.

"Mourinho and the French manager has turned off of him a little bit. You always get the feeling he's playing at 85 per cent. If he showed that extra 15 per cent, then he could do anything. He's got everything you'd want: composure in front of goal, great skill, pace, strength, but what is that little bit missing?

4 - Anthony Martial has scored more goals as a substitute than any other player in the this season. Cameo. October 28, 2017

"The best players in the world don't have 'buts' – the likes of Luiz Suarez, Cristiano Ronaldo, Lionel Messi – there are no buts. Martial is well off that category but that's where he's got to be looking. He's worth £50million and with that talent, he's got to step up.

"He scores in big games, he takes big moments on and obviously has the temperament to play in big games. But come on, let's see it every single week.

"He could be a player that could score 20 goals in 20 games if he really wanted to and strived to be the best."

United's win over Spurs came at an important time for the club, following a 0-0 draw at Liverpool, for which Mourinho was criticised for his negative tactics, and a shock 2-1 loss to Huddersfield Town.

Neville feels his old club deserve credit for their strength of character and admits it was a vital victory in their quest to haul in leaders Manchester City, who remain five points clear at the top.

"The one thing about this Manchester United team is that they are a really resilient unit," he said.

"One thing you can't criticise them for is their attitude. They are tough to beat. It's 36 games now unbeaten at Old Trafford: that's one hell of a record. A lot of clean sheets... they've got something going. There are a lot of positives.

"Mourinho set up to win the game with two up top, which surprised us. He went for it. It was a struggle of a game but it was one they needed to win. There was pressure on United.

"United would have been seven points behind City with a draw, then City would have had a chance to go 10 points clear next weekend before United played at Chelsea. That would've been a big gap. So now, ultimately it gives United a much better chance.