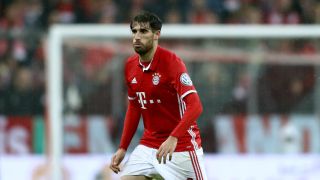 Javi Martinez has been ruled out for the rest of Bayern Munich's season after suffering a fractured collarbone during a hiking break in Spain.

The defender will not be available for Bayern's Bundesliga matches against RB Leipzig and Freiburg, the club confirmed in a statement on Tuesday.

Bayern have already claimed the Bundesliga title and are not involved in any other competitions, having been beaten in the semi-finals of the DFB-Pokal by Borussia Dortmund and controversially knocked out in the quarter-finals of the Champions League by Real Madrid.

Martinez, who became Bayern's club-record signing when he joined from Athletic Bilbao in 2012, missed Saturday’s 1-0 win over Darmstadt through illness.

. has fractured his left collarbone and will miss the remainder of the season.We wish you a speedy recovery, Javi! May 9, 2017

"The 28-year-old Spain international suffered a fractured collarbone on Sunday whilst walking in the mountains in his homeland ... and has already been operated on in Munich on Tuesday," Bayern said in a club statement.

Bayern coach Carlo Ancelotti is already without goalkeepers Manuel Neuer and Sven Ulreich, both of whom have been ruled out for the rest of the Bundesliga season.