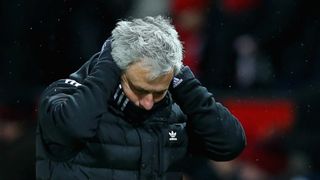 Jose Mourinho singled out Nemanja Matic as an "island of personality" as he criticised the mentality of his Manchester United players despite booking a place in the FA Cup semi-finals.

Romelu Lukaku and Matic converted United's only two efforts on target in a 2-0 win against Brighton and Hove Albion at Old Trafford on Saturday to set up a trip to Wembley.

Mourinho had told his players to "grow up" following Tuesday's surprise defeat to Sevilla in the Champions League and the Portuguese left Paul Pogba and Alexis Sanchez as unused substitutes against Brighton.

Luke Shaw was hauled off at half-time despite playing a role in Lukaku's opener, with Mourinho unimpressed with United's performance in a dour display against the Seagulls.

"I didn't like the game," Mourinho told BT Sport. "I think we deserved to win because I think the game was in control for the majority, we scored two and they didn't score, so we clearly deserved it but we didn't play the way I want.

"I had a reaction from some. Some players were mentally strong enough with football quality and that was the reason we won, but a team of 11 must have six or seven performing and wanting responsibility to play. I'm not happy with the performance, I'm happy with the result.

"When I spend two days with faster build-up and ball arriving earlier between lines and in attacking areas it depends on decisions in possession and movement in attack, I spend two days working on it but attacking players don't want the ball, defenders taking square passes, I have to feel frustrated.

"The biggest frustration is not a bad result because this can happen, it's when I work on the [training] pitch and don't see the situations on the pitch.

"[Scott] McTominay lost more passes than in all his games altogether but he was a Manchester United player, he gives to the team.

"It was a question of mentality. The perfect Manchester United player has quality and personality and is consistent. When you play bad you must have personality."

in the this season:Played Scored Conceded Bring on the semi-finals  March 17, 2018

Although Mourinho did not single out individuals for criticism, Shaw's withdrawal for Ashley Young at half-time was a sign the United manager remains doubtful over the left-back's qualities.

"It was a decision, one player for another in the same position," Mourinho said. "I wanted to defend better, I want my defensive line to be more solid in response to some situations and I want more personality in the team."