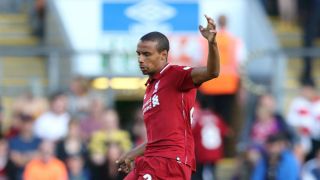 Liverpool are confident the muscle tear suffered by Joel Matip against Borussia Dortmund is not a long-term problem but he will play no further part in the International Champions Cup.

Matip was withdrawn midway through the first half of Sunday's 3-1 defeat in Charlotte, with Jurgen Klopp allaying fears the thigh problem was related to the injury that kept the defender out of the Champions League final.

"It's not the same injury, it's another muscle, but it's a muscle, obviously. It looks like, hopefully, only a little tear," the Liverpool manager said.

Klopp had hoped for a positive update on the 26-year-old but Liverpool confirmed on Monday that the tear would see Matip return to Merseyside.

"Joel Matip will leave Liverpool's pre-season tour of the United States to undergo rehabilitation on the muscle injury he sustained against Borussia Dortmund on Sunday," a statement read.

"The defender picked up the issue midway through the first half of the International Champions Cup fixture and was immediately substituted.

"Though the muscle injury suffered in his upper leg is not considered to be a long-term concern, Matip will not be available for selection in the remaining two games in America.

"He is therefore returning to Merseyside and will continue his recovery at Melwood."