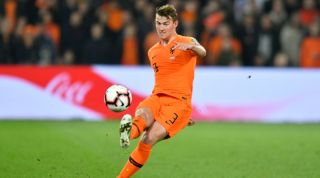 The 19-year-old defender is wanted by many of Europe’s top clubs, with United facing competition from Barcelona, PSG and Juventus.

Spanish outlet El Mundo Deportivo believes that the Netherlands international already has offers from all four clubs on the table.

However, the centre-back is currently occupied on international duty and won’t make a decision on his future until the Nations League is over.

De Ligt will face England in the semi-finals on Thursday, with a final against either Portugal or Switzerland up for grabs on Sunday.

A humiliating campaign for the Red Devils – in which they crashed to sixth place in the Premier League and saw rivals Liverpool win the Champions League and Manchester City lift the league title – has increased United's determination to have a successful transfer window.

With Tottenham reaching the Champions League final and Chelsea triumphing over Arsenal in the Europa League =, Ole Gunnar Solskjaer’s side are willing to spend big to catch up with their domestic rivals in the 2019/20 campaign.