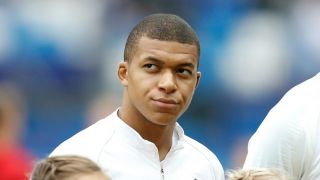 France forward Kylian Mbappe did not take part in training on the eve of their World Cup semi-final against Belgium.

Paris Saint-Germain teenager Mbappe has been one of the stars of the tournament in Russia, scoring three times, including a brace to crown a destructive showing against Argentina in the round of 16.

Head coach Didier Deschamps told a pre-match news conference before training that he expected to have a full squad available to face Roberto Martinez's men and explained players had been rested from recent sessions as a precaution.

Also during the open part of activities at Krestovsky Stadium, Benjamin Pavard and N'Golo Kante worked away from the main group – jogging lightly around the pitch with a member of France's coaching staff.

"Nobody is out, even though we rested some of our players as a precautionary measure," Deschamps said. "Everybody should be fine for tomorrow."

out training now. Pavard and Kante jogging away from the group and no sign of Mbappe.Deschamps did just say he expects everyone to be fit to face so perhaps not huge cause for alarm.July 9, 2018