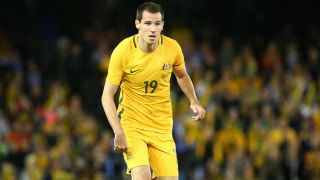 Ryan McGowan has replaced Bailey Wright in Australia's squad ahead of next week's return leg against Syria in their AFC World Cup qualifying play-off.

Bristol City captain and defender Wright will return to England on Sunday, after succumbing to injury.

Wright was suspended for Thursday's 1-1 draw against Syria in Malaysia.

McGowan, who plays for Al-Sharjah in the United Arab Emirates, comes into Ange Postecoglou's 23-man squad for Tuesday's showdown in Sydney.

Ryan McGowan has been called into our squad after Bailey Wright was withdrawn due to injury. - October 6, 2017

The winner will advance to the inter-confederation play-offs to face the fourth-placed nation from CONCACAF for a spot at Russia 2018.