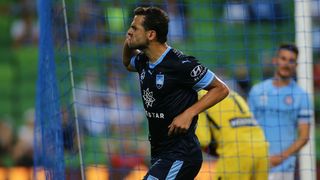 Two goals from Bobo helped Sydney FC to a commanding 4-0 win away to Melbourne City in Saturday's A-League clash at AAMI Park.

The Brazilian struck either side of a fine effort from Milos Ninkovic as Graham Arnold's men made it three wins in a row in a humbling outing for the home side.

Adrian Mierzejewski added a fourth as the leaders moved 12 points clear of Newcastle Jets at the top of the table, having played a game more.

The hosts enjoyed a promising start to proceedings, with 19-year-old Daniel Arzani looking a particular threat, but Bobo broke the deadlock on 32 minutes when his penalty was parried off the bar and in by goalkeeper Dean Bouzanis.

Bobo is the fastest player to score 20 goals in one season.The previous fastest? The man who just came on - February 10, 2018

City pushed for an equaliser but were stung two minutes before the break, when Ninkovic fired home a half-volley from the edge of the area after Sydney had stolen back possession in the final third.

Bobo got his second of the match and his 20th of a brilliant season on 65 minutes, eluding his marker with ease to head in Michael Zullo's cross.

Zullo was the architect again as Meirzejewski scuffed in a volley for Sydney's fourth, ensuring a record-equalling 111th A-League win for Arnold and a miserable weekend for the home fans in Melbourne.