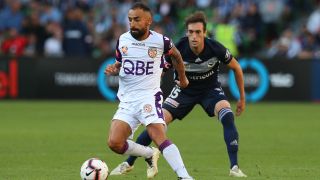 Perth Glory moved seven points clear at the top of the A-League with a 2-1 win away to Melbourne Victory on Sunday.

Second-half goals from Neil Kilkenny and Diego Castro were enough for the visitors at a packed AAMI Park, despite a Kosta Barbarouses strike 12 minutes from time.

Keisuke Honda made his first appearance since December 14 for the home side as a substitute, but he could not inspire a comeback against the leaders.

Opportunities were scarce in a tense first hour, but Kilkenny broke the deadlock 61 minutes in, squeezing a penalty beyond the grasp of goalkeeper Lawrence Thomas after Corey Brown had handled in the box.

It was 2-0 eight minutes later, with Chris Ikonomidis racing into the penalty area down the left and crossing for Castro, who stretched acrobatically to turn the ball home.

Barbarouses buried Leigh Broxham's pass to give Victory a lifeline, but Perth held firm for a 13th win in 18 league matches this season, on the same day their W-League side clinched a Grand Final spot.

That's going to go down as one of the best away days in Glory history!#MVCvPER#OneGlorypic.twitter.com/ZTyGGVquWe— Perth Glory FC (@PerthGloryFC) February 10, 2019