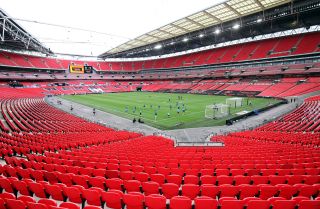 Next season’s men’s and women’s Community Shield matches will be played as a behind-closed-doors double header at Wembley, the Football Association has announced.

Both games will take place in front of empty stands at headquarters on Saturday, August 29 after plans to use it as a pilot event for the re-introduction of spectators were shelved.

FA chief executive Mark Bullingham said: “We are proud to announce the first ever double header of The FA’s Community Shield at Wembley Stadium on Saturday 29 August.

We're delighted to announce that this year's #CommunityShield will feature both a men's match and a women's match, played back-to-back at @wembleystadium on Saturday 29 August.— The FA (@FA) August 12, 2020

“It’s a sign of our commitment to the women’s game and its growth, to have a curtain raiser that mirrors that of the men, with another high-profile fixture at Wembley Stadium.”

The first women’s Community Shield since 2008, which will be shown live on BBC1, will be contested between Super League champions Chelsea and FA Cup holders Manchester City and kick off at 12.30pm.

The men’s game, the seasons traditional curtain-raiser will see Premier League champions Liverpool lock horns with FA Cup winners Arsenal at 4.30pm and will be screened by BT Sport.

Organisers had considered allowing a limited number of fans into the stadium with sport continuing its efforts to emerge from coronavirus restrictions.

However, after similar tests in county cricket and snooker had to be abandoned due to a rise in Covid-19 cases, they opted not to press ahead.

The World Snooker Championship in Sheffield and a county match between Surrey and Middlesex allowed spectators in as part of a trial, but that was abruptly halted after the government changed their guidance in the wake of an increase in infections.

The government announced last month it hoped to be able to allow fans into Premier League games and other sporting events from October 1, subject to coronavirus guidelines. But it remains to be seen whether that will go ahead.