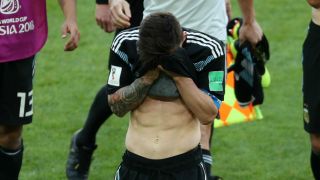 Lionel Messi called for calm and said there is no need for Argentina to go "crazy", despite failing to beat Iceland at the World Cup, partly thanks to his "painful" penalty miss.

Messi was denied by Hannes Thor Halldorsson when he took a second-half spot-kick - and he recorded 11 shots in the game without beating Iceland's goalkeeper.

Argentina's captain, a three-time beaten finalist at major tournaments with his country since 2014, does not want to panic after Iceland claimed a major scalp on their World Cup bow.

"It was hard for us to break, it's not easy when a rival plays so far back," Messi told reporters.

"The penalty was painful, I feel responsible.

"We do not have to go crazy, we deserved to win, but we have to improve a lot, now we have to be calm."

Barcelona superstar Messi has now failed to convert four of his last seven penalties for club and country.

But the 30-year-old is ready to look ahead to Argentina's next match, against Croatia on Thursday.

"This is just beginning and we knew it would not be easy," Messi said.

"It's a bad fight because we deserved to win, we were superior to Iceland.

"We have things to improve, we're going to beat Croatia."