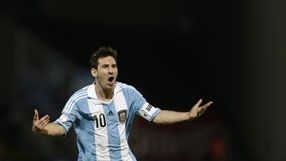 Argentina defend their lead in the South American group at home to Uruguay in Mendoza on Friday. After seven matches they have 14 points, one more than Colombia and Ecuador and two ahead of Uruguay and Chile.

They will be looking to make amends for a poor performance in their last match, a 1-1 draw with Peru in Lima where Messi, who had scored 10 goals in his previous six internationals, had one of his quietest games for his country.

Uruguay's coach Oscar Washington Tabarez does not believe in man-marking Messi, but rather in preventing Argentina from functioning in support of the Barcelona ace.

"Messi is a great player, among the best seen in the history of football...so I'm not going to say too much about that because it would be redundant," Tabarez told reporters in Montevideo on Tuesday.

"But Messi has a team around him trying to ensure be shows all his potential. So we have to work on and counter everything Argentina does for the ball to get to Messi, and after Messi takes it try to mark him."

The Uruguayans, World Cup semi-finalists in 2010, need to recover from a poor September when they lost 4-0 away to Colombia and only managed a 1-1 draw at home to Ecuador.

Captain Diego Lugano believes this double away fixture will be the hardest trip for Uruguay, who play Bolivia at high altitude in La Paz next week, in the 16-match qualifying series.

"These are key (qualifying) points, much more so after the last double-header when we didn't do well," Lugano said.

"We're facing two matches that are surely the most difficult of the qualifying series. An Argentina-Bolivia sequence (away) is very hard and we're practically obliged to bring back some points," the central defender said.

Uruguay have to manage without left wing back Alvaro Pereyra, who is suspended, and injured midfielders Diego Perez and Gaston Ramirez.

Argentina, who beat Paraguay 3-1 at home then drew 1-1 away to Peru last month, welcome back Sergio Agüero but have lost fellow striker Ezequiel Lavezzi to injury.

Midfielder Javier Mascherano said good results against Uruguay and then Chile away in Santiago four days later would put Argentina well on course for a berth in the 2014 finals in Brazil.

"If we can get six out of six points it would be ideal and we would be well on track to qualifying, not certain but on the right track," Mascherano said at Argentina's training base outside Buenos Aires.

"For us, the match against Uruguay is a classic. The last ones we have played against them were very tight (and) if we win we'd go with more confidence to Chile."

The Chileans, whose coach Claudio Borghi is serving a four-match suspension for dissent, first travel to play Ecuador in the rarefied air of Quito nearly 3,000 metres above sea level on Friday.

Colombia, with striker Falcao in red-hot scoring form, are at home to bottom team Paraguay in their favourite Caribbean cauldron in Barranquilla. Bolivia, at home in b