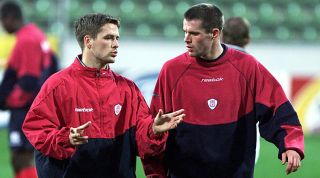 Owen scored 158 goals in 297 appearances for the Merseyside club before upsetting the Liverpool faithful and making an £8 million move to Spanish giants Real Madrid in summer 2004.

The former England striker then went on to join Liverpool’s great rivals Manchester United later in his career, helping the Red Devils lift the Premier League trophy in 2011 - a feat he never managed to achieve during his time at Anfield.

But Carragher, who used to be Owen’s room-mate, believes that Liverpool fans’ anger will subside in future once they reflect on his achievements at the club.

Owen won the Ballon d'Or in 2001 after a fine campaign in which he scored 28 goals in 43 appearances in all competitions; Liverpool won the UEFA Cup, FA Cup and League Cup before following those triumphs with the Community Shield and UEFA Super Cup at the start of the following season.

OUT NOW! Sterling exclusive, Arctic Circle derby, inside Lazio's ultras and much more

Speaking exclusively in the latest FourFourTwo magazine about whether Reds fans will consider Owen alongside Liverpool’s greatest ever players, Carragher says: “I think in time that will come.

“It (2000/01) was definitely my favourite season. If you win three competitions and also finish third in the league, it means you won most of the games we played.

“That’s probably the one team where I look back and think ‘I was playing with all my mates.’ Michael was there, Robbie Fowler, Danny Murphy, Steven Gerrard, Didi Hamman, Jamie Redknapp - sharing those things together is special.

“We could always take big scalps. That was the great thing about that team - we may not have been the best, but we could beat the best.”

The reason why Liverpool were so successful that season, according to Carragher, was because they had the best striking options up front during that treble-winning campaign.

“In that season, with Owen, Fowler, Heskey and Jari Litamen, we possibly had the best set of strikers in the world,” said the ex-defender.

“Michael really didn’t have a great first half of the season, but as soon as he got his form back it was scary.”

Read the full interview with Jamie Carragher and Michael Owen in the Autumn 2019 issue of FourFourTwo magazine, out in shops and available digitally now. We also chat to Raheem Sterling, meet Lazio’s ultras, discover how to make Real Madrid and Barcelona great again, catch up with John Barnes and much, much more. You don’t want to miss it.