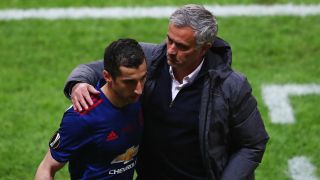 Henrikh Mkhitaryan expects Unai Emery to uphold the attacking brand of football that has helped him to enjoy life at Arsenal more than he did at Manchester United under Jose Mourinho.

The 29-year-old endured two frustrating seasons at Old Trafford, making just 26 Premier League starts after joining from Borussia Dortmund in July 2016 for a fee in the region of £27million.

Mkhitaryan moved to the Emirates Stadium as part of the deal that took Alexis Sanchez in the opposite direction last January, and the Armenia star admits he has found it easier to adapt to the Gunners' style of play.

"Arsenal have always played offensive football," he told reporters in Singapore, where Arsenal are on International Champions Cup duties.

"Under Jose, the [United] team was playing a bit differently. But I'm not blaming anyone, I'm not criticising anyone, it's just a different philosophy.

"I can just say I'm enjoying myself more here than I was in Manchester."

Playing with old friends has added to an already positive atmosphere around the club, according to Mkhitaryan, who set his sights on the Premier League's top four after last season's disappointing sixth-place finish.

He said: "When I came to this club I felt the warmth of this team is really different, it's like a family and everyone is taking care of you.

"It's always nice to play with your old team-mates, with Aubameyang and Sokratis.

"We're all looking forward to the new season and we’re going to try to do our best to help this team reach the top four of the Premier League."