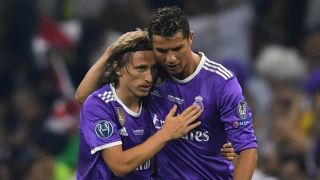 Real Madrid midfielder Luka Modric thanked Cristiano Ronaldo for his extraordinary contribution to the club as he rued the star forward's sale to Juventus.

Ronaldo completed a sensational €100million switch to the Serie A champions earlier this week, bringing an end to his successful nine-season stay in Madrid.

He leaves as Los Blancos' all-time top scorer and a four-time Champions League winner with the team he joined in 2009.

Modric, who is set to captain Croatia in the World Cup final on Sunday, conceded his disappointment over the departure of the Portugal great.

"My wish was for Cristiano to stay. He is unique and it is a pity he has left," the 32-year-old told reporters after Croatia's semi-final win over England.

"I thank him for everything he did at Real Madrid. I wish him all the best except when he is playing against Madrid."

For now, Modric's focus is squarely on helping Croatia upset France in his nation's first ever World Cup final appearance.

The former Tottenham man has been widely praised for leading Zlatko Dalic's side to the decider but says he has no interest in whether he is named the tournament's best player.

"I do not care about the Golden Ball, really," Modric said.

"I just think about the final and to be able to lift the World Cup with all my team-mates. That's what we want."