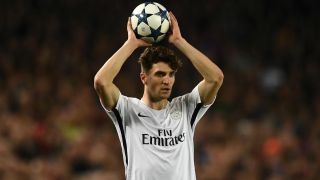 Monaco and Nice's challenge to Paris Saint-Germain is good for both Ligue 1 and Unai Emery's side, according to defender Thomas Meunier.

PSG's chances of defending their title suffered a major blow on Sunday when they lost 3-1 away to Nice in a miserable outing that saw Angel Di Maria and Thiago Motta sent off in the final minutes.

The loss means Emery's men now sit three points behind leaders Monaco, who have played one game fewer, and only three matches remain for them to overturn the deficit.

Third-placed Nice are also in striking distance of PSG, with the gap cut to three after a victory given to them by goals from Mario Balotelli, Ricardo Pereira and Anastasios Donis, but Meunier thinks a competitive league will ultimately benefit his team.

"There is still the Coupe de France final, but we are not going to give up on anything [in the league]," Meunier said to the club's website.

"We will play to the end and do our utmost to try and catch Monaco.

"We have had a great season with more than 80 points. Monaco and Nice were able to keep pace. That is great for the league and it will help us grow too."

Meunier felt the result did not accurately portray the story of the match at the Allianz Riviera and lamented a missed opportunity.

"I don't know how to explain it," said the Belgium international. "When you dominate so much, with more than 70 per cent possession and a lot of chances created, we could have won it.

"We came up against a Nice team that played it very well. They had four clear-cut chances and scored three of them. I think we can be annoyed with ourselves as we had the opportunity to do something good."

While PSG look likely to miss out on the title for the first time since 2012, they have already won the Coupe de la Ligue and face Angers in the Coupe de France final on May 27.