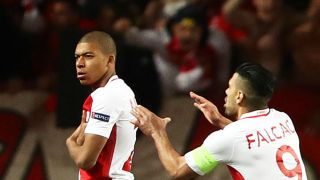 Kylian Mbappe insists Monaco are not hoping to avoid any club in the semi-finals of the Champions League after knocking out Borussia Dortmund on Wednesday with a 6-3 aggregate victory.

Mbappe opened the scoring on the night after just three minutes, turning home a rebound after Roman Burki parried a Benjamin Mendy drive, as the teenager became the youngest player to score five times in the Champions League.

The 18-year-old was a lively presence throughout as goals from fellow strikers Radamel Falcao and Valere Germain saw Monaco through to the semi-finals - where they could face Real Madrid, Juventus or Atletico Madrid - but Mbappe is unconcerned about the prospects of Friday's draw.

"What more could you ask for than to be in the semi-finals?" Mbappe said after becoming the first player in Champions League history to score in his first four knockout ties. "Well, I suppose we could be in the final!

"If we hadn't thought we could do it, we wouldn't have done it. After every step we've taken we've looked at it and we've kept working. We have to keep going along the same lines and look at what didn't work so well today; I think that at some points we were too passive, we sat too deep. Against good teams you're always going to have to do that sometimes, but the result was good.

"I don't mind who we draw next; in the semi-finals there's only huge clubs and we don't want to avoid anyone."

Mbappe suggested Monaco's attacking tactics and their teamwork have been the decisive factors in the Ligue 1 leaders making it to the semi-finals of the Champions League for the first time since 2003-04, when they lost to Porto in the final.

"It's been an incredible season and we're a bunch of mates who manage to enjoy ourselves out on the pitch," Mbappe said. "We're really pleased about that and we hope it continues.

"We try not to let pressure get into our heads and play the way we usually do. We play attacking football. That’s what we do best and today it worked as we qualified for the semi-finals. The Champions League is very difficult and you need to keep your concentration at all times. I try to do what I know how to do and for now it's working.

"Of the five goals I've scored in this competition my favourite was my second goal in the first leg against Dortmund. That was the most beautiful of the lot for me."