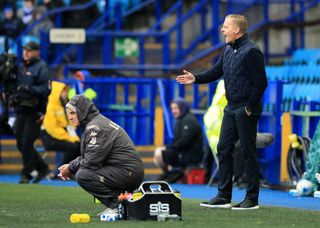 Sheffield Wednesday manager Garry Monk believes his players set a standard with their performance against Leeds they have to maintain if they are to aim for promotion from the Sky Bet Championship.

Although the Owls fought out a goalless draw with their Yorkshire rivals – the first between the sides in 50 years – at a rain-lashed Hillsborough, Monk feels Wednesday now have to push on from the result.

“That’s what we have to use,” said Monk, who only took charge in early September. “The players have been great with me these last seven or eight weeks we’ve had together.

“I could see the ability to compete, that determination about us, fighting for each other every week, (it) had to improve, and today was probably the highest in terms of that.

“As I said to the players at the end, it’s all part of fighting for that standard. It’s what we try and push every day, and can you push that in the games as well.

“In terms of the performance today, it’s the next step. Now can we maintain that and be even better going forward? It’s very hard to do that every single game in the Championship.

“But that mindset to do it is very important, and as I’ve reminded them at the end, we’ve set a standard on that, and now we need to push that even more.”

Monk felt his side deserved the win on the balance of chances, with Steven Fletcher striking the crossbar, missing an open goal and Kiko Casilla making a hat-trick of excellent saves.

Leeds were not without their moments as Keiren Westwood also made a couple of notable stops, while Gjanni Alioski headed against a post.

Yet Monk said: “I feel proud of that performance. It was two really good teams going at it in those conditions, but overall our performance warranted the three points.

“If any team was going to win the game, we deserved it, especially in the second half as we were so dominant, and we had the most offensive actions in the whole game.

“You won’t often see Leeds under that pressure, and it was them scrambling towards the end.”

Leeds boss Marcelo Bielsa felt the game was “different to those we are accustomed to playing”.

The Argentinean added: “In the first half we played better and although we controlled the match, they had the chances.

“In the second half, the match changed. Sometimes they commanded, imposing their style on us at certain moments, sometimes we did.

“It was the kind of match you can win or lose.”

Leeds arguably could have been reduced to 10 men on the hour when half-time substitute Eddie Nketiah appeared to make contact with his elbow with Joey Pelupessy, yet the incident was missed by referee Tim Robinson.

Monk said: “I was told it could have been (a red card), and that the elbow was quite a nasty one.

“I didn’t see it. I was more annoyed at the fact they were allowed to play on and get to a situation inside our box, while we had a player with a head injury.”