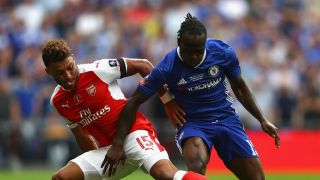 Victor Moses was sent off for diving in Chelsea's FA Cup final against Arsenal on Saturday.

With his side already trailing to an early controversial goal from Alexis Sanchez, Moses got one-on-one with his direct opponent Alex Oxlade-Chamberlain on Chelsea's right wing.

Having tricked his way into the penalty box, Moses went down under Oxlade-Chamberlain's challenge and referee Anthony Taylor decided there was not enough contact.

Moses was therefore booked for simulation by the official and, as the Nigeria international had already been shown a yellow card for a foul on Danny Welbeck, he became the fifth player to be dismissed in an FA Cup final.

The Football Association announced earlier in May that it will introduce a new rule on diving for next season, with players able to be banned respectively if they are found guilty of simulation.

A panel comprising an ex-match official, one former manager and a retired player will meet to review each case independently.