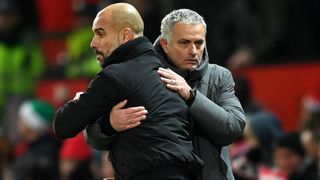 Jose Mourinho admits there can be no arguing with Manchester City's dominant Premier League campaign in 2017-18 and fears it will be tough for Manchester United to close the gap.

Pep Guardiola's champions are 19 points clear of second-placed United heading into Sunday's final round of matches.

A win against Southampton will see them set Premier League records of 16 victories and 50 points earned away from home in a single campaign.

City have already set a new best tally of wins (31) and goals scored (105) and they will break United's record for the biggest winning margin at the top of the table if they keep the gap at 19 points.

Given the spectacular nature of their form this season, Mourinho concedes City fully deserve to be champions and says United "are going to try" to challenge next term.

"The difference of points tells a lot," he said ahead of United's clash with Watford at Old Trafford. "I always think that in the championships, the truth is always there. In knockout competitions, you can have a bad day. Sometimes, in a lucky or unlucky moment, sometimes the truth is not always there.

United's 0-0 draw with West Ham on Thursday guaranteed they will finish second – their highest league finish since they last won the title back in 2012-13.

With an FA Cup final against Chelsea to come, Mourinho is happy his players showed sufficient commitment to end the season on a positive note, although he does not think their achievements are "enough to celebrate".

First season at  Scoring our Goal of the Season Mentoring  Nemanja Matic has been speaking to the ... May 12, 2018

"I'm happy. I'm happy because it was the position that was available since October or November," he said.

"Two things can happen to the club like us: one would be 'I cannot be first and I'm not professional and I'm not committed. I have no pride, and for me it's the same to finish second, third or fourth'. The other way was 'this is the position that is available and we are going for it'.

"Is it enough to celebrate? No, not for me. But we did our job the best we could and now I think the boys can feel they did a positive Premier League, of course much better than last season."