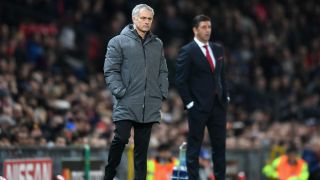 An own goal from goalkeeper Mile Svilar and a Daley Blind penalty secured the win at Old Trafford and put United on the brink of a place in the Champions League last 16.

Mourinho criticised United fans before the game for what he considered to be unfair treatment of Romelu Lukaku, who has now not scored for six matches, and risked the wrath of the crowd further in his matchday programme notes, in which he told supporters he hoped they would enjoy the game more than the 1-0 win over Tottenham on Saturday.

Speaking afterwards, he refused to offer his perspective on United's performance, instead referring to those who "are paid to comment on my work".

He continued: "I'm more than happy [with the performance]. We change a lot of players, we broke the natural dynamic and routine of the team. We played a kid from the academy [Scott McTominay], we scored two goals, we didn't concede, three more points, more money for the club because every victory means more money, no significant injuries, just something in Jesse [Lingard's] back which is not important...

Mourinho also confirmed it was his instruction for Blind to take the late penalty, the defender having taken the ball off Ander Herrera and Romelu Lukaku, who had looked ready to assume responsibility after Anthony Martial had seen his first-half spot-kick saved by Svilar.

"The reason is Martial was the player to take, he took, he missed, he wasn't on the pitch," Mourinho explained. "The players were happy to take responsibility, Romelu and Herrera as well, but this was my decision.

"We train, I analyse and try to make the right decision. In the last days, Martial didn't miss one against three very good goalkeepers, and he missed. Daley was my decision in the moment."

United need only a point from their last two matches against Basel and CSKA Moscow to guarantee their place in the next round, and Mourinho seemed surprised that four wins out of four was still not enough to send them through.

"We didn't qualify yet? See? Four victories and it's not enough. We must get that point," he said.